We recently caved and decided to turn our dining room (which we never, ever used) in to a playroom for Logan. We are in a rental right now, so I can’t go overboard and do everything that I would like to do (i.e., chalkboard wall!), so I’ve been trying to come up with some easy but creative ways to make this little room a fun place for Logan.

Here is our dining table with the leaf removed. Makes for quite a nice little cave doesn’t it? I thought about putting sheets over it and cutting out a door and windows, or maybe hanging a giant tent from the ceiling and draping it over the table to make it look like a circus…(I know my husband is rolling his eyes right now).

Big Beast of a Box

I was thinking on it, and thinking some more, when there came a knock-knock-knocking at my door. Who was it? Oh, it was just Mr. Inspiration, at it again, gifting me with this magnificent ginormous box (which was, by the way, entirely too large for the item that was shipped in it!).

So many wonderful things could be done with this beast of a box! I was all over the place in my mind, coming up with different uses for the box, when all of a sudden the light finally went on and I knew what I had to do.

This box’s destiny was to become a Super Cool Fort for my Super Cool Son, Logan. YES! I wanted to start right away, but I’ll be honest with you – the box sat in the garage for a while, gathering dust, waiting for the day that it would finally be up-cycled.

Well folks, today was that day!

Here is how we did it!

First, (after dusting it off) I broke down the box, and sliced it open so it that was one long piece of floppy cardboard…

Break down box into one long piece

I then manipulated the giant beast to fit it around my dining table, bending as needed around the table’s edges — I had to manhandle it a bit, but in the end it submitted. If you don’t have a table, that’s OK, you can use the flaps at the bottom to help stabilize it.

Bend it around the table

Next, I cut out the door with my heavy duty scissors. These things are awesome, I think they can cut through metal (as seen on TV), but I have to say my hand was killing me by the time I was done.

Cut out the door

I used some of the painters tape to reinforce the flaps and just to secure it to the table. The painters tape will not harm the table, in fact most of it has already peeled itself off, but the fort is still holding strong!

Fun with a Sharpie

Now the fun part — a little Sharpie action! I drew in some boulder looking things, basically rounded rectangles, and filled in the gaps with black. Then I tried to add some texture with the lines inside the boulders.

I felt like it needed a little more pizazz after this. I took the piece of cardboard that was left over after cutting out the door, Sharpied it, and sat it on it’s flap on the table behind the front of the fort to give it another tier.

I felt like it needed ownership – someone had to claim this fort! So I made a sign and a flag using the scrapbook paper and a straw..

And used more of the tape to attach them to the Fort. All Done! 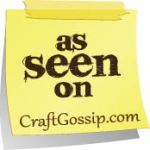